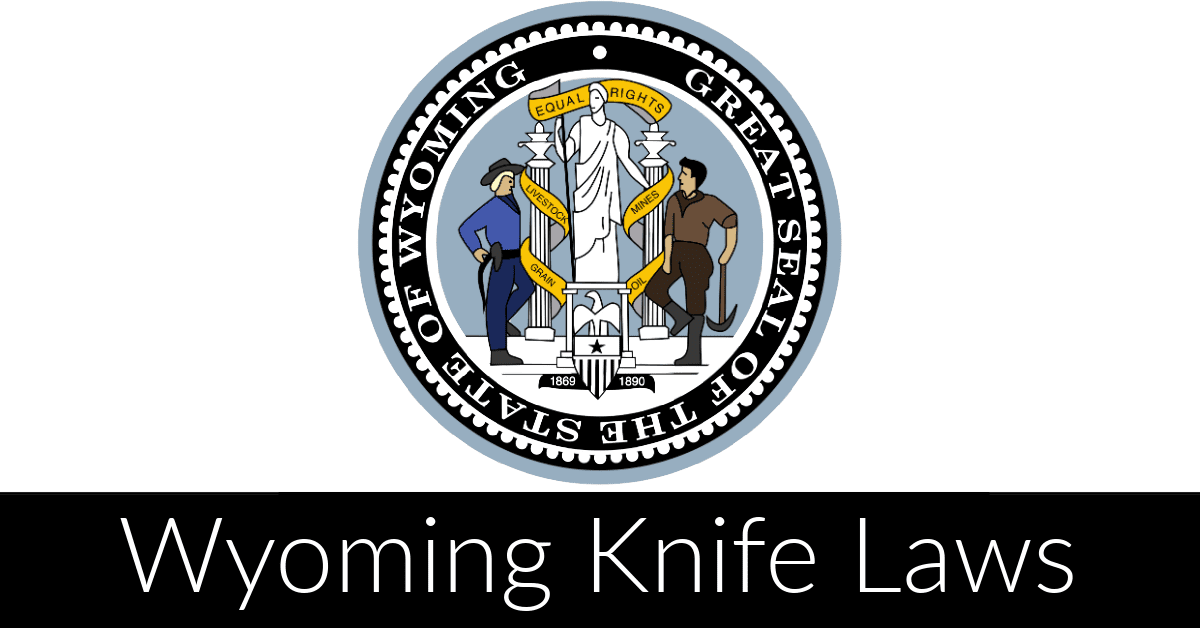 Do you live in Wyoming? Are you interested in knives? If so, this article is for you! Here we will cover the basics of knife law in the state of Wyoming. This includes what types of knives are legal, who can carry them, and how old you have to be to buy and possess knives. We will also take a look at any unique knife laws that may apply to the Cowboy State. Stay safe and stay informed!

Is There Statewide Preemption?

A statewide preemption is a law that prohibits individual municipalities from enacting their own laws (knife laws in this case). In other words, the state legislature has decided that all firearms and weapons regulations will be uniform across the entire state.

Wyoming does have a statewide preemption statute, which can be found in WYO Stat § 6-8-104(a). This law states that it is a misdemeanor to carry a concealed deadly weapon in Wyoming, with a few exceptions. It is worth noting that this statute does not mention knives specifically, but rather refers to ‘deadly weapons’.

Because it is vague, most laws specifically referring to knives are made at the city or county level.

Who Can Buy And Carry A Knife In Wyoming?

There are no age requirements to buy or possess a knife in Wyoming. This means that both adults and minors can purchase and carry knives without any legal restrictions.

The only time there is a legal restriction is when the person looking to acquire a knife is doing so with the intent to harm or injure another person.

For a state without many knife laws, the concealed carry knife laws of Wyoming are a bit confusing.

The short version is: if you’re eligible for a concealed carry permit (you don’t actually have to have one) and are not looking to harm anyone with your knife then you should be fine to conceal it.

To meet the criteria, you:

At the same time, you also would have to carry a photo ID issued by the state while carrying the knives in a concealed state. This is done in order to prove your residency. As far as non-residents of Wyoming are concerned, they have to obtain and possess a license for concealed weapons from a state that shares reciprocity with the state of Wyoming.

Wyoming doesn’t impose any statutory prohibitions on the general possession and ownership of knives. However, it does provide prohibitions for carrying and wearing a concealed deadly weapon. It is still a subject of dispute as to whether knives are considered deadly weapons or not in this state.

§6-1-104 defines deadly weapons “(a)(iv) Deadly weapon means but is not limited to a firearm, explosive or incendiary material, motorized vehicle, an animal or other devices, instrument, material or substance, which in the manner it is used or is intended to be used is reasonably capable of producing death or serious bodily injury.”

To put it simply, residents of Wyoming are free to carry knives both openly and concededly as long as they fulfill the qualifications for a license of a concealed weapon.  It should be noted that it is not mandatory to own a license, it’s enough to simply qualify for one.

Moreover, there are also no restrictions on buying, selling, giving, and receiving as gifts, and manufacturing of knives.

What Kinds Of Knives Are Legal In Wyoming?

Wyoming has no laws specifically prohibiting or regulating the ownership of any type of knife other than switchblades. This means that all knives, including daggers, dirks, stilettos, and other so-called ‘dangerous’ knives are legal to own and carry in the state.

For clarity, it is legal to own the following types of knives:

What Kinds Of Knives Are Illegal In Wyoming?

As we mentioned earlier, Wyoming has no laws specifically regulating the ownership or carrying of knives. This includes pocket knives. You are free to carry a pocket knife concealed or openly in Wyoming without any legal restrictions.

Are There Knife Length Laws In Wyoming?

In Wyoming, there are no laws regulating the length of knife blades. This means that you are free to own and carry any type of knife, regardless of its size or blade length.

What Are The Consequences Of Violating Knife Laws In Wyoming?

Carrying a dangerous weapon on school grounds is punishable by imprisonment for not more than six months, a fine of not more than $750, or both.

It is important to note that these are only the maximum penalties for each offense. The actual sentence imposed will be determined by the judge based on the severity of the offense and the criminal history of the offender.

For most people who are just carrying knives for everyday use, there should be no instances of breaking knife laws.

Can A Felon Carry A Knife In Wyoming?

In Wyoming, it is legal for any person of any age to carry a knife openly or concealed without a permit. There are no restrictions on the type of knife that can be carried, and there are no length requirements.

However, it is illegal for a felon to carry a concealed deadly weapon. A felony weapons charge is punishable by a fine of up to $2000, imprisonment for up to two years, or both.

Can I Carry A Knife In Government Buildings?

Carrying a knife on school property is governed by federal law, not state law. It is illegal to possess a knife on school grounds regardless of your age or criminal record. This includes knives that are carried openly or concealed.

There are no restrictions on the type of knife that can be carried, and there are no laws related to the length of a knife.

Wyoming knife laws really aren’t very stringent. But what makes the confusion rise is their vagueness, which actually works as a blessing in disguise because the types of knives to be carried in a concealed manner in the state of Wyoming aren’t technically defined; therefore, most are regarded as legal to be carried.

I’m just a normal guy doing my best to muddle through all these legal texts but, hopefully, I was able to clear things up for you and save you the trouble of looking things up for yourself!