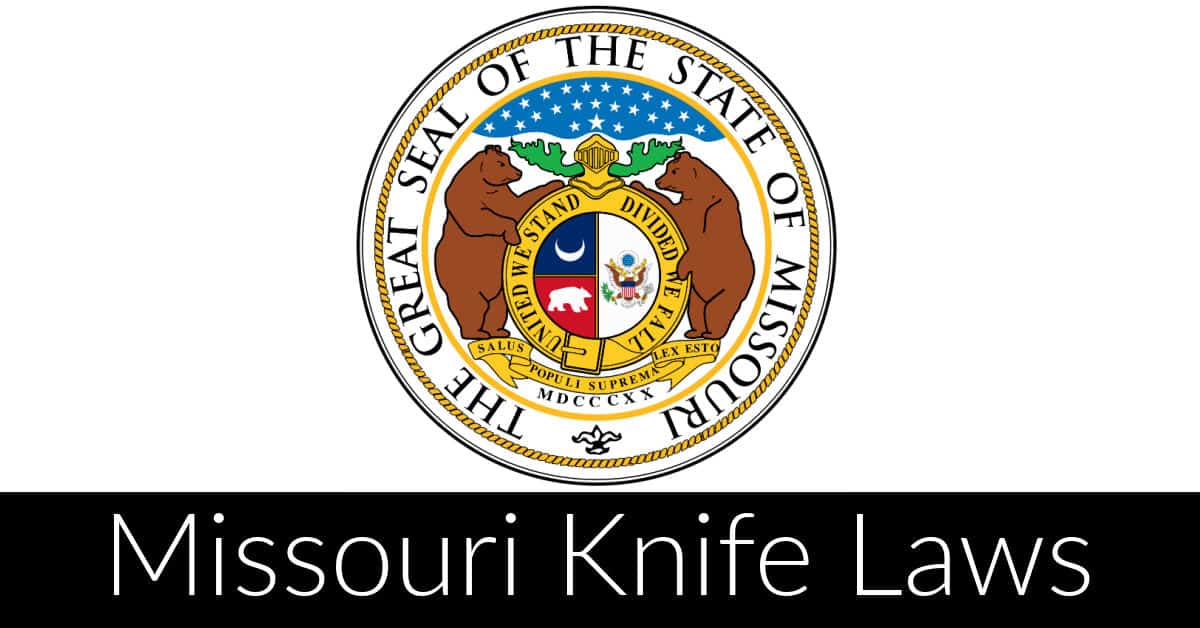 Missouri is not a state that I would classify as knife-friendly. The state constitution gives citizens the right to keep and bear arms, but there are a lot of grey areas regarding the ownership, use, and carrying of knives in the state.

Hopefully, this article can help sieve through the legal jargon and bring some clarity to Missouri knife law.

Missouri does not have statewide preemption knife laws. This means local counties can have other restrictions on knife use and ownership in their cities. However, no knife laws within the counties stand out.

Before learning about Missouri knife laws, you should know some basic definitions. They include:

The above terms are used in different contexts within the law, and knowing their meanings will help you understand as you read along.

The following knives are legal to own in Missouri.

It is illegal to possess, manufacture, transport, or repair a switchblade knife in violation of federal law.

So what does the federal law say about switchblade knives?

So, what does this mean for you?

It means that you can own, possess and carry a switchblade knife in Missouri because you will not be violating federal law regarding the same.

This is where things get a bit complicated…

Even though you can own any knife in Missouri, there are several limitations regarding how and where you can carry your knives.

Summarized below are Missouri knife carry laws that you should know about.

The law lists 17 locations where you cannot carry your knife in Missouri. Here are a few:

Remember, an ordinary pocketknife is a knife with a blade length of four inches or less. Therefore, according to this statute, it is illegal to brandish an everyday pocket knife and any other weapon readily capable of lethal use in front of one or more people angrily or in a threatening manner.

Since any knife can be considered a weapon readily capable of lethal use, it is wise to exercise caution when carrying a knife in public places or at events like protests.

The following persons are exempt from Missouri knife carry laws:

What size knife is legal in Missouri? Missouri does not have any limits on knife length. The only place where blade length is mentioned is specific to pocketknives.

According to the law, an ordinary pocketknife is a knife with four inches or less blade length. Besides that, you can own any knife regardless of size in Missouri.

Who Can Carry and Buy Knives in Missouri?

No age restrictions on selling or transferring knives are mentioned in Missouri state law. The ban on switchblades was lifted, and as long as you are not going against federal law, anybody can buy, sell, manufacture, or carry a switchblade knife in Missouri.

Additionally, it is a crime for anybody to carry a firearm or projectile weapon (as defined by the law) while intoxicated, negligently, or unlawfully.

How Old do You Have to be to Carry a Knife in Missouri?

There is no age cap on knife carry laws in Missouri. This means that anybody can carry a knife except in certain locations, regardless of whether you have a permit or not.

Can a Felon Carry a Knife in Missouri?

According to the law, it is a class B felony for a previous offender or persistent offender to carry a weapon, in this case, a knife.

Additionally, even though citizens have a right to bear arms, people with a violent history or mental illness are prohibited from carrying weapons in Missouri.

Can You Open Carry a Knife in Missouri?

You can open carry any legal knife in Missouri, including switchblades and pocketknives with a four-inch blade or shorter.

Can You Conceal Carry a Knife in Missouri?

It is illegal to conceal carry a knife in Missouri. However, if you have a valid concealed carry permit, you can carry your knife anywhere except for schools, churches, government buildings, courthouses, and anywhere else where guns are restricted.

The only knife you can conceal carry without a permit is a pocket knife with a blade shorter than four inches.

Are Neck Knives Legal in Missouri?

According to the law, ordinary pocket knives are knives with blades shorter than four inches. Therefore, it is safe to say that neck knives fall under this category, making them legal to own and carry open and concealed in Missouri.

Can You Carry a Fixed Blade Knife in Missouri?

Fixed blade knives are legal to own and carry in Missouri. However, depending on the size, large fixed blade knives can be illegal to conceal carry unless you have a valid permit issued by the state.

Is it Legal to Own a Gravity Knife in Missouri?

The law defines a switchblade knife as a knife that opens or releases from the handle by the force of gravity. This definition puts gravity knives under the switchblade category. The switchblade laws in Missouri are guided by federal law, and according to the federal switchblade act, these knives are legal to own and carry in Missouri.

Missouri is one of the few states that is less knife-friendly than my own home state so hopefully, I was able to give some reasoning and insight into why that is.

Missouri knife law leaves quite a bit of gray and I can’t guarantee that my interpretation is always correct so be sure to arm yourself with knowledge before anything else as you choose which knife to carry!