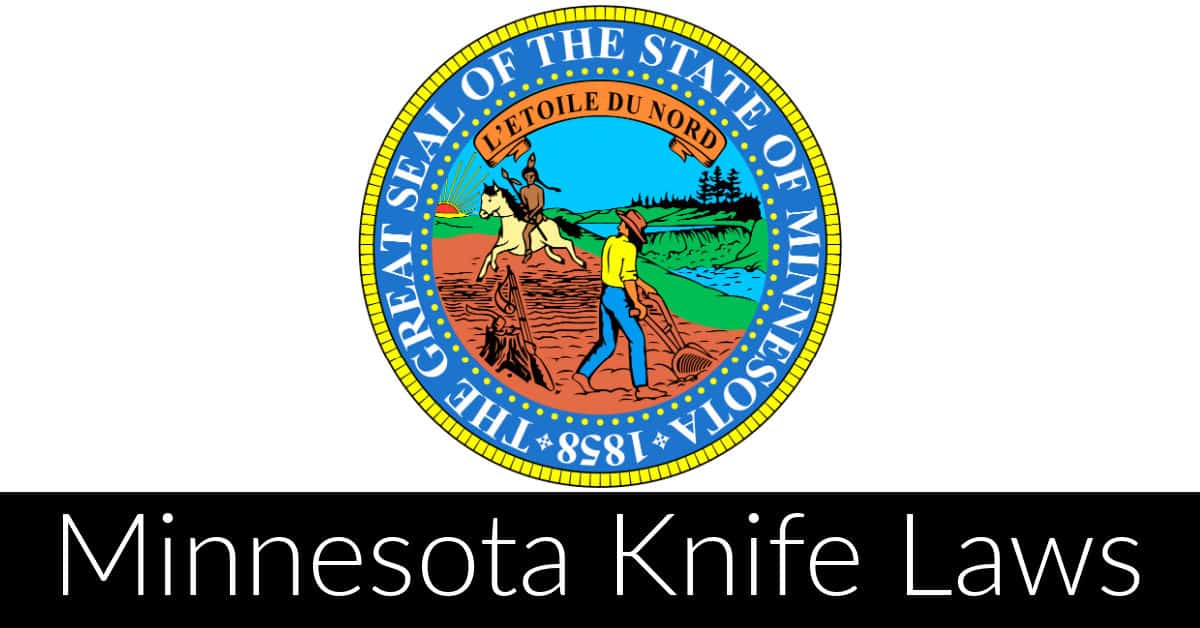 Minnesota is home to fishers and hunters who often use knives as a tool. However, the use of knives within gangs and other criminal activities has forced the government to regulate the use of knives. Knife laws are mainly a state issue, and each state has its own rules.

In Minnesota, knife laws are a bit lax, especially regarding recreational activities. However, to ensure that you remain on the right side of the law, here is what you need to know about knife laws in Minnesota.

Below is a list of legal knives in Minnesota:

There are two important things you should know in this section:

So, are all other knives besides switchblades and metal knuckles legal in Minnesota?

The law has only mentioned the two items, so there is no restriction on owning or carrying other types of knives. However, with the definition of dangerous weapons, it is against the law to carry any knife with the intent to harm.

How Does Minnesota Define a Switchblade or Switchable Knife?

Currently, Minnesota does not have a clear definition of a switchable or automatic knife that can be viewed as common law.

There is, however, an unpublished opinion of State vs. Quimby in 2008, defining a switchblade as a spring-powered knife that opens by pushing or sliding a button. This definition is similar to the generic meaning of an automatic knife.

Note that unpublished court opinions cannot be cited or used as precedence because of a lack of evidence to support the claim.

So, what does this mean for you?

It means that the court can still define a knife as a switchblade and charge you with a misdemeanor or gross misdemeanor crime.

What Knives are Illegal in Minnesota?

In Minnesota, it is a misdemeanor to manufacture, transfer, or possess a switchblade, switchable, or automatic knife.

Some knives, like the WWI trench knives, have a metal knuckle for a handle and are legal in other states.

However, trench and push knives do not have utility uses, so according to Minnesota state law, they are dangerous weapons. Therefore, if the state can prove that you intend to harm, you will be charged with a crime.

1. Knives as a Weapon Against Others

In section a5, under the dangerous weapons act, the law prohibits possessing a dangerous weapon, article, or substance to be used unlawfully or as a weapon against others.

What does this mean?

It means you can carry any knife as long as you do not intend to use it unlawfully or harm others.

If you find yourself in trouble, the proof burden is on the state. They must provide enough evidence to show you had the intent to harm using whatever legal knife you were carrying.

It is a felony to possess, store, or keep a dangerous weapon while knowingly on school property. The penalty for this crime is a minimum of $10,000 fine, five years of imprisonment, or both.

The law defines school property as:

This law does not apply during knife shows, gun shows, firearm safety, marksmanship courses, or other activities conducted on school property.

It is a felony to possess or carry a dangerous weapon in a courthouse and certain state buildings within the capital area.

Museums and art collectors can possess or carry dangerous weapons for lawful purposes like a public exhibition.

A person who feels threatened or unsafe when you carry a dangerous weapon can file a complaint to the court.

The court can force you to place sureties to keep the peace for a maximum of six months with the possibility of appeal during this period.

There is no restriction on blade length for knives in Minnesota. However, this might not apply to all local towns.

For example, in Minneapolis, any knife with a blade longer than four inches is illegal to carry, regardless of whether it is concealed or open. In Woodbury, it is three inches.

Are there any laws in Minnesota that restrict knives by age or criminal history?

How Old do You Have to be to Carry a Knife in Minnesota?

There is no age restriction on carrying utility or legal knives in Minnesota. However, there is no statewide preemption, so some towns can have different knife laws. For example, it is illegal in Saint Paul to carry knives in public places.

How Old do You Have to be to Buy a Knife in Minnesota?

There are no age restrictions on selling or transferring legal knives in Minnesota, including those considered dangerous weapons.

You should be good with the law if your intent is not to harm others. Remember, different towns within the state can impose stricter laws, so check with your local town laws before sending your minor to buy a knife in Minnesota.

Can a Felon Carry a Knife in Minnesota?

Generally, felons are not allowed to own or possess firearms. In addition, a felon with a weapons possession charge is prohibited from owning a switchblade, butterfly knife, and anything that can be considered a deadly weapon.

Convicted felons can own any legal knife, but they cannot carry it outside of their home or in public places. This also includes carrying the knives in a car. Going against this law can result in a class A misdemeanor charge.

When it comes to possession laws, there is a difference between ownership and carry laws. Carry laws are the rules that govern weapons use outside your home and in public spaces.

Can You Open Carry a Knife in Minnesota?

Open carry is to visibly carry a knife in public.

You can open carry any legal knife in Minnesota in a sheath on the waist or wherever you see fit.

Can You Conceal Carry a Knife in Minnesota?

Concealed carry is to carry a weapon in a concealed manner but in close proximity to you. This includes your car.

In Minnesota, you can conceal carry any knife that is legal to own.

At the end of the day, understanding Minnesota’s knife laws doesn’t seem overly complicated. With that being said, I’m just a normal dude, and working my way through all of the legal jargon was a grind.