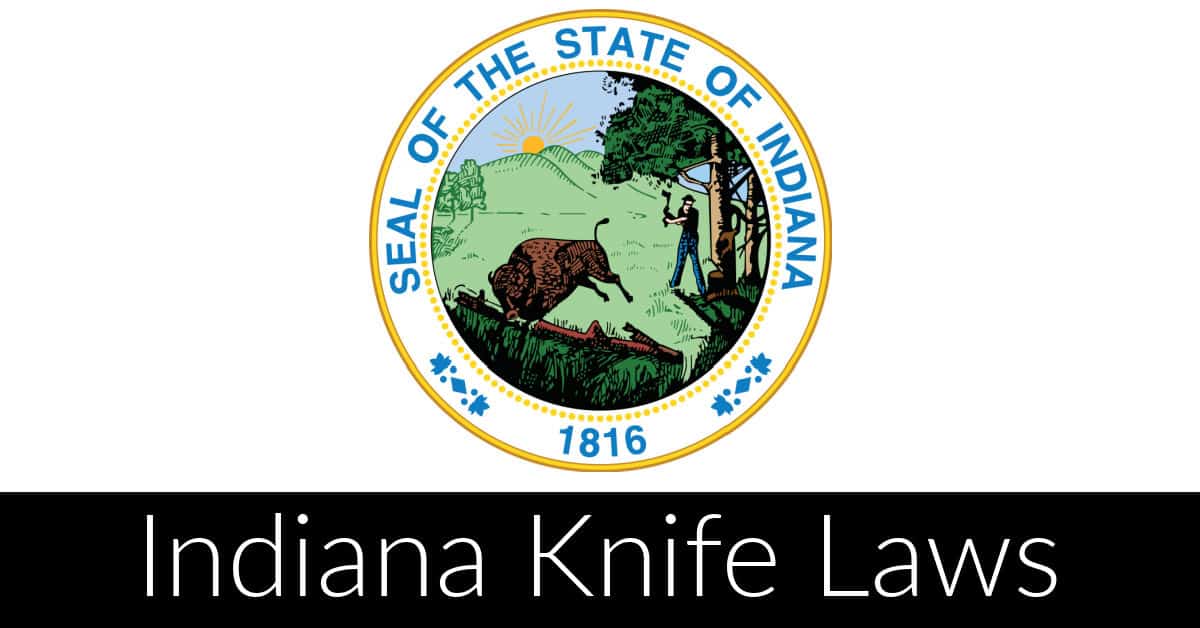 Indiana does not have strict knife laws compared to other states. In fact, people will testify that it is one of the most knife-friendly states in the country.

The Hoosier state only has location restrictions, but other than that, you are free to own and carry any knife in Indiana. In addition, Indiana knife laws are pretty straightforward compared to other states, which have long, complicated clauses.

Here is everything you need to know about knife laws in Indiana.

Does Indiana Have Statewide Preemption?

In Indiana, state law does not apply throughout local municipalities, meaning that towns can have other restrictive laws regarding knives. For example, carrying a knife in public parks is illegal in South Bend and Westfield.

In Merrillville, you can only carry pocket knives with blades shorter than two inches. In addition, it is illegal to conceal-carry any other knife in public within the town.

To avoid getting in trouble with the law, it is important to research if a nearby town has other knife laws before traveling across Indiana.

The following knives are legal to own in Indiana:

Switchblades have only become legal in Indiana recently (after then-governor Mike Pence ended the ban in 2013). Today, it is legal to possess and sell switchblades or automatic knives in Indiana.

The definition of Chinese throwing knives is as follows: a throwing knife, throwing iron, or other knife-like weapons with multiple angled blades.

Furthermore, the law defines a knife with a detachable blade as a knife with a blade that can be ejected by gas, spring, or any other device on the handle. This definition makes all ballistic knives illegal to own in Indiana.

In Indiana, there are two laws that mention specific knife types:

The law states that it is a class C misdemeanor to manufacture, cause to be manufactured, import, keep or offer for sale, give, lend or possess a Chinese throwing knife.

Knife with a Detachable Blade

Knife carry laws aren’t extensive at the state level in Indiana. The main knife law to abide by is as follows:

It is a class B misdemeanor to recklessly, knowingly, or intentionally possess a knife on school property, a school bus, or a special bus.

Under this section of the law, a knife is defined as an instrument with a pointed blade or sharp edge capable of inflicting damage by tearing, cutting, or stabbing and used (or intended to be) as a weapon.

Knives mentioned under this law are:

Exceptions to this rule are people who carry or use a knife authorized by the school authority or if the blade is stored secured in a vehicle.

Note that the above law is not limited to the knives mentioned but includes all knives as defined by the law. This means that it is illegal to carry any knife, regardless of type, on school property, school transport, or on special buses.

And that’s the extent of Indiana state knife carry law. But don’t forget local ordinances. Here are two of note:

There are no laws restricting knife blade lengths in Indiana. This means you can own any legal knife regardless of size.

Remember, Indiana has no statewide preemption, so the rules might change as you travel across the state. For example, carrying a pocket knife with a blade longer than two inches in Merrillville is illegal.

Indiana laws are clear on who can buy, own or carry knives within the state. Keep reading to learn more.

How Old do You Have to be to Carry a Knife in Indiana?

Indiana Knife laws are mentioned under prohibited instruments of violence. Under this section, there is no law providing an age cap on carrying knives in the state. The only ban that applies to everyone regardless of age is on ballistic and Chinese throwing knives.

Additionally, it is illegal for anyone despite their age, to carry a knife on school property unless they have approval from relevant school authorities.

However, there are age restrictions on possession, sale, transfer, and giving anyone under 18 years a firearm, handgun, or machine gun (unless a parent or guardian supervises the transaction).

How Old do You Have to be to Buy a Knife in Indiana?

Buying ballistic and Chinese throwing knives in Indiana is illegal for adults and minors. Otherwise, all other knives are legal to own, but there are limitations when you carry them outside your residential property.

Can a Felon Carry a Knife in Indiana?

According to Indiana law, it is a class A misdemeanor for a convicted felon to carry a knife within the school property.

Besides the laws mentioned above, there is no other provision under prohibited instruments of violence limiting knife carrying for felons.

Delivery of a Deadly Weapon to an Intoxicated Person

Indiana has a unique knife law, where it is illegal to provide (sell, trade, give/gift, etc.) a deadly weapon to an intoxicated individual or someone you know who has a habit of intoxication.

In this section, we can include knives in the category of deadly weapons because of the law’s definition of the term.

A knife is an instrument with a sharp edge or pointed blade intended to be used as a weapon. Therefore, it is safe to conclude that giving a knife to an intoxicated person or someone who has a habit of becoming intoxicated is against the law.

Indiana does not limit conceal or open carry of knives in the state as long as you do not carry knives within or on school grounds. However, it is illegal in Merrillville to conceal-carry any knife in public.

At the end of the day, understanding Indiana’s knife laws doesn’t seem overly complicated. With that being said, I’m just a normal dude, and working my way through all of the legal jargon was a grind.