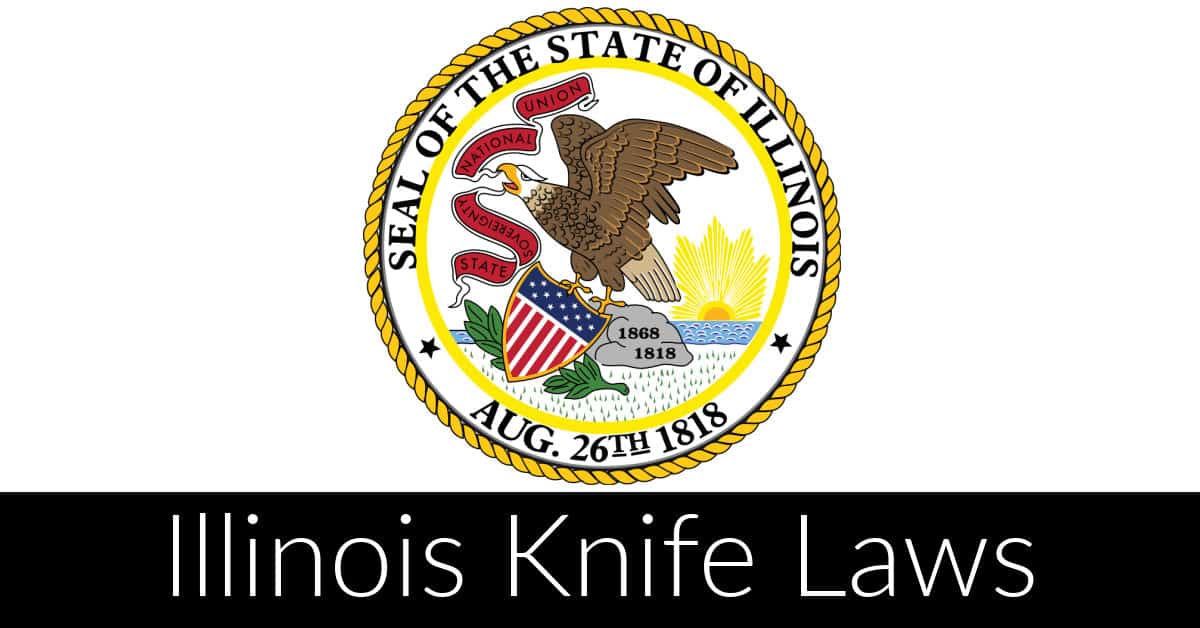 In Illinois, people have the right to keep and bear arms. However, these rights come with a bunch of restrictions on firearms, knives, and other deadly or dangerous weapons.

Truthfully, knife laws in Illinois can be very confusing because the law also questions your intent, and that is where it gets tricky. This post will try and break it down for you but do consult a lawyer or someone in law enforcement for more clarification.

Does Illinois Have Statewide Preemption?

Illinois does not have statewide preemption, so local cities, towns, and even counties can have other restrictions on the possession and carry of knives.

Since other towns can impose their own knife laws, it becomes even harder to understand whether you are on the right side of the law or not.

Because you must follow the state’s laws and also abide by the local town laws. You will understand this better as you read along, but let’s start with the simple stuff.

Below is a list of knives that you can own in Illinois:

According to the law, it is illegal to possess the following knives in Illinois:

The law was amended in 2017, and people can now own and carry switchblade knives if they have a valid Firearms Ownership Identification (FOID) card.

You need to be 21 years or older to qualify for the same. In addition, it will cost you $10 and a wait time of 30 days to get your FOID card.

Remember, municipal laws might differ from state laws, so even with your FOID card, carrying a switchblade might be illegal, depending on the town you plan to visit.

Before we go any further, you should know that Illinois has three categories of dangerous weapons.

Knives are found in categories II and III of dangerous weapons, and they include the following:

According to the Illinois knife carry law:

It is important to note that knives with blades shorter than three inches can still be considered dangerous if you intend to use them unlawfully or to harm others.

Because there is no statewide preemption, different towns have other restrictive knife laws. Illinois locations with notable knife restrictions include Aurora, Cook County, Chicago, and Joliet.

To give you an idea of how strict knife laws are in Illinois, here are the knife carry laws in Chicago (the biggest city in the state):

There are 16 different counties in Chicago, and Cook County is one of them. Chicago and Cook County have their own set of knife laws, meaning you have to abide by the state, city, and local town knife laws for each. Things can get real complicated, real fast!

In Illinois, any knife with three inches or longer blade is considered a dangerous weapon. Remember, your intention of carrying the knife can also determine whether a knife is dangerous or not, regardless of length.

The length restriction in Chicago is 2.5 inches for conceal carry and two inches for anyone under 18 years.

The above Illinois knife laws do not apply to:

Is there an age cap on Illinois knife laws? What if you’ve been convicted of a felony – can you carry a knife in Illinois? Keep reading to find out.

How Old do You Have to be to Carry a Knife in Illinois?

The only age cap noted is under the unlawful possession of firearms and firearm ammunition. The laws state that it is illegal for anyone under 18 years to possess any firearm which can be concealed by a person.

As far as knife laws are concerned, there is no age restriction on carrying a knife in Illinois.

How Old do You Have to be to Buy a Knife in Illinois?

Illinois law bans anyone from manufacturing, selling, buying, carrying, or possessing all the knives mentioned under dangerous weapons, including switchblades and ballistic knives. However, the ban on switchblades was lifted after the 2017 amendment.

In Chicago, it is illegal to sell, give or loan any knife with a two-inch blade or longer to anyone under 18 years. Note that other cities and counties can have different laws, so ensure you do your research before sending your minor to the store.

Can a Felon Carry a Knife in Illinois?

In Illinois, it is against the law for a convicted felon to knowingly possess a dangerous weapon (as defined by the law) under any circumstance.

Unlawful possession results in a class 3 felony charge, including a 2-10 years jail term. Repeat offenders and felons under parole can be charged with a class 2 felony, including a jail term of 3-14 years.

There are no restrictions on concealed or open carrying of knives in Illinois. However, this can differ depending on the town. For example, concealed carrying any knife with a blade longer than 2.5 inches in Chicago is against the law.

Illinois state law is not specific on concealed or open carry, so it is safe to assume that the carry laws apply whether you are visibly carrying a knife or not.

At the end of the day, understanding Illinois’ knife laws doesn’t seem overly complicated. With that being said, I’m just a normal dude, and working my way through all of the legal jargon was a grind.