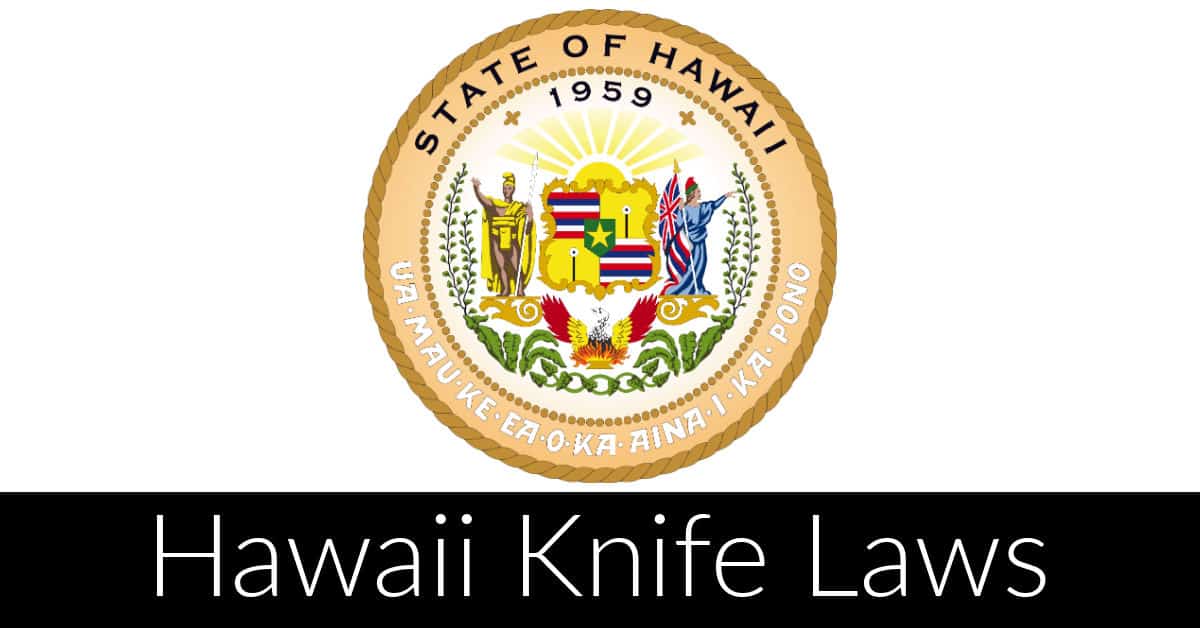 Hawaii is one of the top destinations for tourists in the United States. Therefore, it is natural to expect the state to have strict rules on weapons to protect residents and visitors within the state. Right?

Hawaii knife laws are somewhat specific but also unclear in some sections. This article will attempt to simplify these laws to help you navigate the legal side of blades (and stay out of trouble).

Does Hawaii Have Statewide Preemption Laws?

Hawaii does not have statewide preemption meaning local counties within the state can impose stricter knife laws.

Interestingly (as of writing this), Hawaii has no city, town, or county with differing knife laws. This is rare compared to other states, and it means that Hawaii’s state laws are upheld across the board.

There have been numerous cases where the Hawaiian court has been forced to define a dangerous weapon and describe the appearance of specific knives.

In this section, you will learn the essential meanings of certain terms within the law as defined in notable cases within the state:

In Hawaii, you can own any knife except for those listed in the illegal knives section. Here’s a list of legal knives in Hawaii:

In Hawaii, you cannot own or possess switchblades and butterfly knives as described or defined by the law.

The law states anyone who knowingly possesses, intentionally uses or threatens to use a switchblade to commit a crime will be charged with a Class C felony.

Like switchblades, it is illegal to own or carry butterfly knives. The law clearly states that anyone who knowingly possesses or intentionally uses a butterfly knife to commit a crime or manufactures, sells, transfers, or transports butterfly knives in the state will be charged with a crime.

Other Knife Carry Laws in Hawaii

Besides the above laws, there are other notable knife carry laws in Hawaii:

In the case of Giltner vs. State, Giltner was found carrying a diver’s knife with a 6.5-inch-long blade which was later ruled to be legal.

There is no other mention of knife length in Hawaii knife laws; therefore, it is safe to say that there are no knife length limits in Hawaii.

This assumption means you can own any knife, including swords and other large knives in Hawaii. Remember, the imitations come when you choose to carry your knives in public.

Let’s examine what the law says about who can own and carry knives in Hawaii.

How Old do You Have to be to Carry a Knife in Hawaii?

There are no age restrictions regarding who can carry a knife in Hawaii.

However, according to the law, it is safe to assume that nobody, regardless of age, can carry a dirk, slug shot, blackjack, billy, metal knuckles, pistol, or any other deadly or dangerous weapon upon himself or in a car.

How Old do You Have to be to Buy a Knife in Hawaii?

Selling, manufacturing, transferring and transporting switchblades and butterfly knives are illegal in Hawaii. This means that anybody selling or buying these knives, regardless of age within the state, is doing it illegally.

Besides switchblades and butterfly knives, you can own any knife you desire, but there are limits on what you can carry outside your home.

Can a Felon Carry a Knife in Hawaii?

There is no specific law referring to felons and knives in Hawaii. It is, therefore, safe to assume that Hawaii Knife laws apply to every citizen, convicted or not. Therefore, it is illegal for a felon to carry a dirk, dagger, metal knuckles, pistol, or other deadly or dangerous weapons.

Additionally, it is illegal for a felon to knowingly possess, intentionally use or threaten to use a deadly or dangerous weapon to commit a crime. The law further states that any weapon found in the possession of a convicted person will be destroyed by the sheriff or chief of police.

Open and concealed carry knife laws are tricky in Hawaii, but here is what you should know.

Can You Open Carry a Knife in Hawaii?

You can open carry knives that are not considered deadly or dangerous weapons in Hawaii. These include:

Remember, dangerous weapons are weapons designed primarily as weapons or diverted from their normal use and prepared for combat.

So, what does this mean?

With the above definition in mind, an instrument that is not a deadly or dangerous weapon when diverted from its normal use becomes illegal to carry.

Can You Conceal Carry a Knife in Hawaii?

You can conceal carry knives that are not considered as deadly or dangerous. However, this is only acceptable when you have no intention of diverting the knife from its normal use.

Remember, to conceal carry means carrying upon a person or in a used or occupied vehicle of the person. Additionally, it is illegal to open or conceal carry any knife on school property.

At the end of the day, understanding Hawaii’s knife laws doesn’t seem overly complicated. With that being said, I’m just a normal dude, and working my way through all of the legal jargon was a grind.