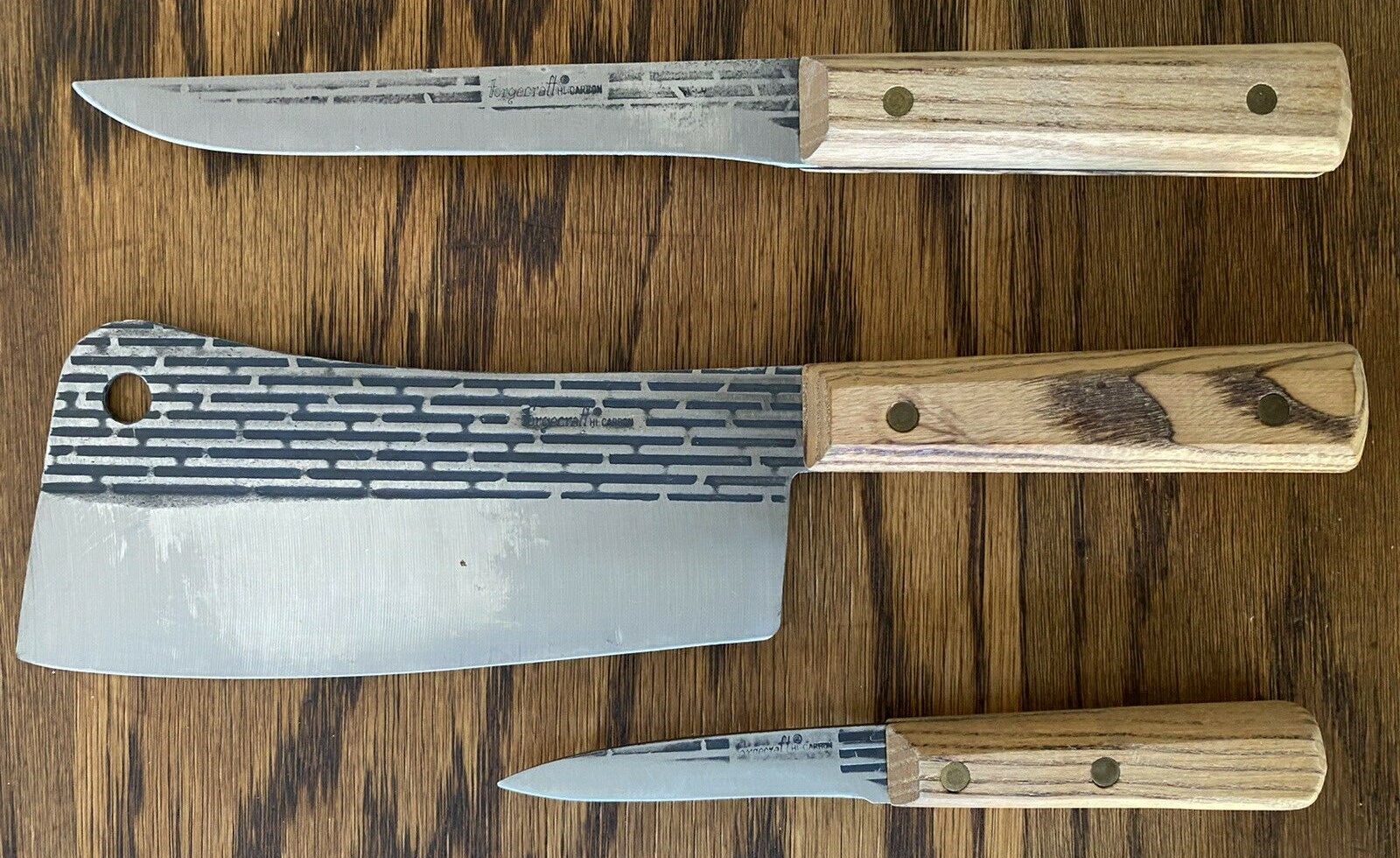 I’m not sure what’s going on lately but I’m sure the hipsters are to blame.

In the past year, the price of vintage knives, particularly high carbon versions, has gone sky-high. There is usually an ebb and flow of vintage knife sales but this time prices don’t seem to be coming back down anytime soon.

Despite the hugely increased interest in old knives, many people have no idea of the incredible history and materials used in these knives.

They simply look on eBay for vintage cooking knives and buy whatever looks the coolest.

To try and remedy that, I’m here to share what I know (and what I’ve gathered) about one of my favorite brands, Forgecraft.

Forgecraft Knives have a rich history and are always in high demand. But why?

Despite the popularity of their knives, there is very little information available about Forgecraft Knives as a company.

What is known is that Forgecraft was actually a line of knives that was produced by Washington Forge (another defunct company).

The Forgecraft line was started in the early 50s although this is somewhat muddied by the use of the words “Forgecraft” by other companies.

Washington Forge discontinued the Forgecraft line in 1968 and no new knives were produced after that point.

You’ll sometimes hear people claim that you can still buy New In The Box Forgecraft knives and, to a point, they’re not wrong. Thousands of knives sat in storage for years and continued to be sold in new condition from restaurant supply houses.

Much like vintage cast iron, the material used to make old knives is the stuff of mystery. Nobody knows exactly what it is but every old-timer you meet will tell you that it’s tougher than anything you can get today.

Forgecraft Knives are particularly prone to myths (probably of their own making) so let’s figure out what we know for sure:

Forgecraft Knives are made of high carbon steel and (most of them) are extremely hard (around 60 HRC). The steel is fairly reactive and forms a great patina for several years until it “settles down”.

The most likely possibility is that the blade is 1095 steel. 1095 steel is fairly cheap, super durable, and is usually quite easy to sharpen.

This is one of my favorite ideas around Forgecraft Knives. Probably because it’s just so absolutely American.

“Giant industrial saw blade broke? No problem, just make a knife out of it.”

The truth is, there was a huge amount of scrap steel (from saw blades and other sources) after the end of WW2. Because it was so cheap, it stands to reason that companies such as Washington Forge would buy it up and use it for their knives.

However, there is not much supporting evidence besides the possibility of it happening.

So while it’s possible that some blade steel was used, it’s more likely just a fun myth.

What’s With The Pattern?

One of the hints that point toward Forgecraft Knives being made out of old saw blades is their unique line pattern on the blade. Industrial bandsaw blades often have a similar pattern due to the cold rolling method that was used to create them. The lines left from the rollers also reduced the contact area the blade had with the wood, meaning it would run cooler.

However, many companies adopted a similar pattern (even today) and it seems to be more of an aesthetic choice than anything else.

According to the NOS Forgecraft knives that I’ve purchased, the handles are made out of hickory.

In general, hickory wood is a less common choice for knife handles because of its open grain and less-than-interesting looks. However, it is a tough wood (comparable to oak) that finishes well and is very durable for work implements and knives that will be used hard.

If you’ve spent much time using a hammer, ax, shovel, etc. you’re probably used to feeling hickory wood in your hands as the commercial industry relies on it heavily for tools.

In Forgecraft Knives this makes for a handle that lasts well but isn’t very special looking. Many people choose to modify the scales on their knives for superior material, feel, and thickness.

The pins are regular old brass pins that serve their purpose just fine.

Despite my best efforts, dating a Forgecraft knife isn’t really possible. There just isn’t enough information available. The best you can do is figure out a decade and determine whether one is older than another.

The stamped logo did evolve over time and, if I get more information, I’ll update this with pictures of each era.

As an interesting side note, each Forgecraft Knife was shaped and sharpened by hand. Because each craftsman had a unique style, it’s possible to recognize knives that were worked on by the same person (probably on the same machine).

This means that every Forgecraft Knife will cut a little bit differently so, when you find one you love, treat it well!

Types Of Knives Made

One of the coolest parts of owning old knives is putting together a hodge-podge set of exactly what you want and use. However, if you want to own all of the Forgecraft Knives that were made, these are the ones that you’ll need to collect:

Forgecraft Knife Value (And Where To Buy/Sell)

The value of Forgecraft Knives has been on a steady rise for the past several years and I don’t see it retreating any time soon.

If you’re in the market for Forgecraft Knives (or any other old high carbon cutters) the best place to find them is wherever people are specifically selling knives.

Let me explain. You can find Forgecraft Knives on eBay all day long. However, because the person knows what they are selling it is quite possibly the most expensive place to buy old knives. If you are looking for something specific or in excellent shape, eBay might still be your best bet.

Otherwise, stick to yard sales, flea markets, antique malls, etc. where you can often pick up “rusty old knives” for a couple of bucks apiece.

If you are looking to sell your old knives, eBay, Etsy, and Knife Forums are your best bets for getting top dollar.

For years, high carbon knives were considered to be disposable work knives and many spent their days being used to chop out weeds in the yard or being “restored” horribly by home experimenters.

Unfortunately, I am one of those home experimenters…

I won’t get on a high horse and tell you not to modify old knives. Just keep them useful!

Here is my advice if you want to use Forgecraft Knives in the kitchen these days:

That’s all I’d do. They are hardworking knives that don’t need much. And for heaven’s sake, leave the patina! It will be back soon anyway as 1095 is a fairly reactive steel.

If you are going to be doing hours of prep, however, there is one more thing that should be on your radar.

Forgecraft Knives are not dainty. They are fine being used to hack through all sorts of things. However, if you’re going to slice a case of onions or tomatoes you might be in for a rough time. This is especially true if you buy a well-used knife that has been sharpened dozens of times over the years. (one knife I recently bought was shaped a couple of times per year on an upright grinder).

So you’ll probably want to thin out the blade before you sharpen it.

Thinning involves reducing the width of the knife’s bevel behind the main edge. This makes it far easier for the knife to move through food. Even if your knife is crazy sharp, a thick knife is more likely to wedge and get stuck while cutting.

Before sharpening your knife, thin it out to about 1/3 of the way above the cutting edge.

Just be sure not to ruin the slightly concave surface that makes these knives such find choppers!

For a thorough treatment on thinning kitchen knives, read here.

At the end of the day, choosing to use Forgecraft Knives is more of a romantic decision than anything. They are great knives that require just a little more love and care than a modern option.

However, I hope that a bit more information about the company has increased your appreciation for what once was!